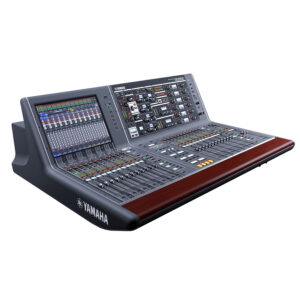 Perfecting the Art of Live Sound

Yamaha’s first professional live sound console, the PM200, was released more than 40 years ago. The PM series has provided fertile ground from which numerous sound reinforcement milestones have grown ever since. Many of those innovations have become benchmarks that professionals depend on to this day. The RIVAGE PM10 launched a new generation of PM consoles that have already become standards in large-scale live sound applications because of their unequalled sound, operation, functionality, reliability, expandability, and more. Now the RIVAGE PM7 digital mixing system expands the digital mixing options available for an even broader range of applications.

A RIVAGE PM7 system is based around the CSD-R7 Digital Mixing Console with built-in signal processing for mixing and effects. Other required components are one or more I/O racks for input and output, and a dedicated interface card for network connectivity. The RIVAGE PM7 system’s CSD-R7 Digital Mixing Console is the same size as the RIVAGE PM10 system CS-R10 Control Surface and has the same control layout. With built-in DSP it offers similarly high standards of operation and workflow efficiency in a relatively compact, portable system.